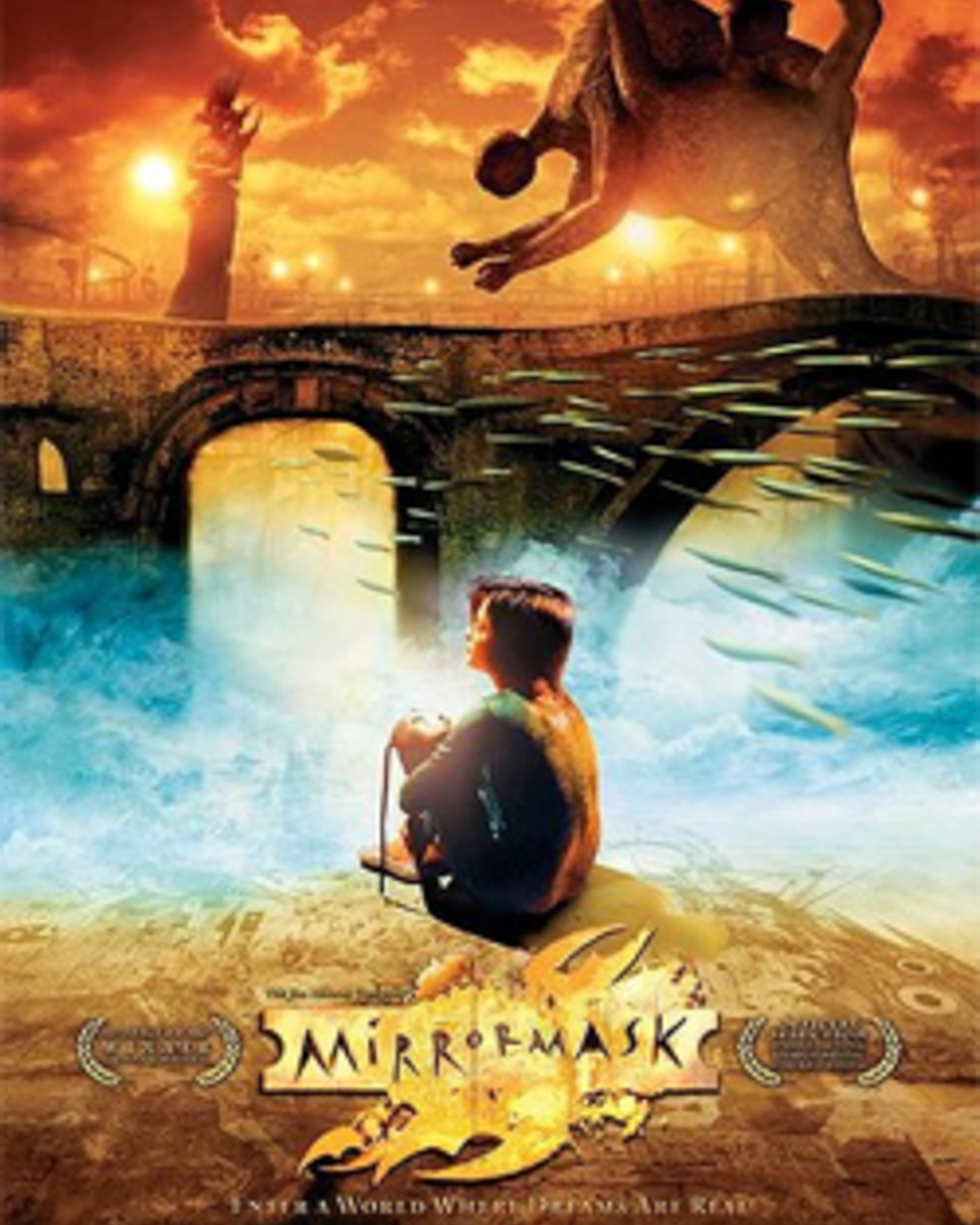 MirrorMask is a 2005 dark fantasy film designed and directed by Dave McKean and written by Neil Gaiman from a story they developed together. The film stars Stephanie Leonidas, Jason Barry, Rob Brydon, and Gina McKee.

The music used in the film was composed by Iain Ballamy. It was produced by The Jim Henson Company. Gaiman and McKean worked on the film concepts over the course of two weeks at Jim Henson’s family’s home, and actual production of the film took seventeen months.

Created on a budget of $4 million, the film was originally made as a direct-to-video film, but had a limited theatrical run in the United States on September 30, 2005, resulting in a domestic theatrical gross of $867,000. The film was also screened at the 2005 Sundance Film Festival where it received positive responses. The overall critical reaction to the film was mixed, with critics praising the film’s visuals while complaining about the overall story and script.

Helena Campbell (Stephanie Leonidas) works with her parents Joanne and Morris (Gina McKee and Rob Brydon) at their family circus, but desires to run away and join real life. At the next performance, after Helena and Joanne have a heated argument, Joanne collapses and is taken to the hospital. Ten days later, while Helena is staying with her grandmother, she finds that the doctors determine that Joanne requires an operation, and Helena can only blame herself for the situation.

That night, she wakes up in a dream-like state and leaves her building to find three performers outside. As they try to perform for Helena, a shadow encroaches on the area and two of the performers are consumed by it. The third performer, Valentine (Jason Barry), a juggler, helps to quickly direct Helena to safety through the use of magical flying books. She learns they are in the City of Light which is slowly being consumed by shadows, causing its widely varied citizens to flee. Soon Helena is mistaken for the Princess. She and Valentine are taken to the Prime Minister (Brydon). He explains that the Princess from the Land of Shadow stole a charm from the White City, leaving their Queen of Light (McKee) in a state of unnatural sleep and the City vulnerable to the Shadows. Helena notes the resemblance of the Queen and Minister to her mother and father, and offers to help recover the charm along with Valentine. They are unaware their actions are being watched by the Queen of Shadows (also McKee) who has mistaken Helena for her daughter.

Helena and Valentine attempt to stay ahead of the shadows as they follow clues to the charm, learning that it is called the “MirrorMask”. Helena discovers that by looking through the windows of the buildings, she can see into her bedroom in the real world, through the drawings of windows that she created and hung on the wall of her room. She discovers that a doppelgänger of herself is living there and behaving radically differently from her. The doppelganger soon becomes aware of her presence in the drawings and begins to destroy them, causing parts of the fantasy world to collapse. Valentine betrays Helena to the Queen of Shadows in exchange for a large reward of jewels. The Queen’s servants warp Helena’s mind so she will believe she is the Princess of Shadows. Valentine has a change of heart and returns to the Queen’s palace, and helps Helena to break the spell on her. They search the Princess’ room, and Helena discovers the MirrorMask hidden in the Princess’ mirror. They flee the castle with the charm.

As they escape to Valentine’s flying tower, Helena realizes that her doppelganger in the real world is the Princess of Shadows, who had used the MirrorMask to step through the windows in Helena’s drawings. The Princess destroys the rest of the drawings in Helena’s room, preventing Helena from returning, and Helena and Valentine disappear in the collapsed world. The Princess takes the drawings to the building’s roof to disperse the shreds into the wind, but discovers one more drawing Helena had made on the back of the roof door. Helena successfully returns to the real world, sending the Princess back to her realm. At the same time, the Queen of Light finally awakens and the two Cities are restored to their natural balance.

Helena is woken up on the roof by her father, and they to learn that her mother’s operation was successful; Helena returns to happily help at the circus. Sometime later, Helena becomes fascinated by a young man, strongly resembling Valentine, who wants to be a juggler for the circus.

When I first saw the Mirror Mask I was amazed by its rich visuals and the story line. During gathering of my inspiration to the dream project, I came back to this film, just to be again transported into a strange land of endless dream-inspiration