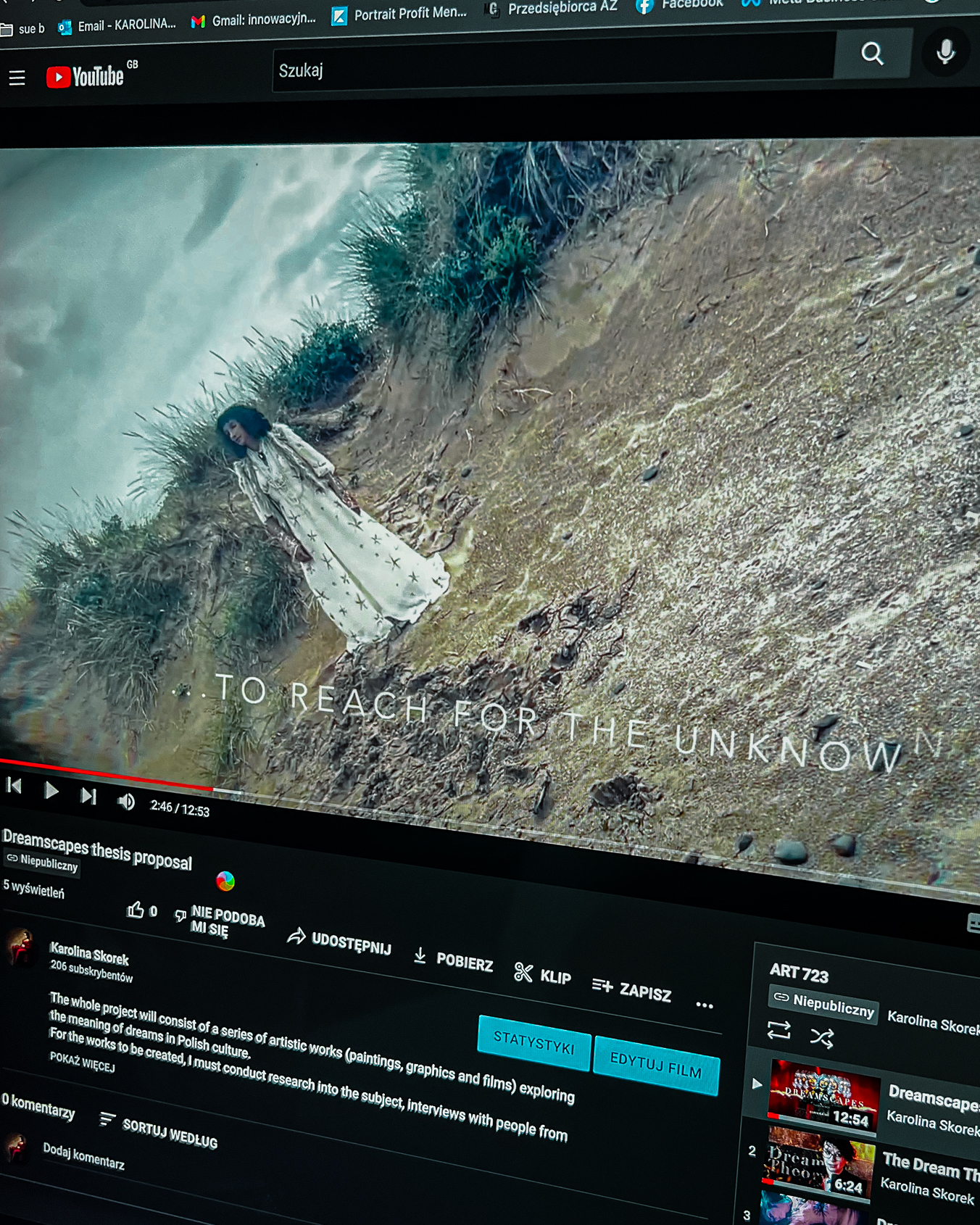 The whole project will consist of a series of artistic works (paintings, graphics and films) exploring the meaning of dreams in Polish culture.

For the works to be created, I must conduct research into the subject, interviews with people from various environments, including scientific and artistic ones, which will not only be a partial inspiration for the conceptual part of the work, but also the research itself will be presented as part of the thesis submission. I plan to close my search in a 20-minute documentary / film essay  consisting of fragments of conversations with people, my discoveries and documentation of the creative process as well as short film forms supplementing the visual side of the work.

I am also open to the possibility of creating a series of short – 15-20 minutes long dream “episodes”, each focused on a specific aspect of dreams and dreaming. The cycle will be started by assistant professor dr. Marcin Szydłowski, who will talk about the historical meaning of dreams for the Slavs. He will bring us literature that explores the beliefs of the Slavs and current knowledge on this topic. The second chapter would be an overview of the physiology of sleep, a short story of what sleep is from the point of view of biology, what we know about it, and how certain pharmacological agents affect sleep. I have already sent out an invitation to an interview with Dr. Of biological science. Ewa Klimacka-Nawrot. I believe that this passage will also provide an interesting counterpoint to the next conversations that will be rooted in philosophy, art and beliefs. After talking to Dr. Klimacka-Nawrot, I would like to interview Jakub Babicki, a phytopharmacologist. Jakub is an expert in naturopathy, but also an area that fascinates me when it comes to dreams and visions, i.e., the use of psychoactive plants from our area. This is how they work, as well as new research into psilocybin and psychoactive substances in medicine and psychology. I plan to have the third conversation with a psychologist, we will take up cultural issues, what sleep is for contemporary people. We will try to find out whether it can be used as a therapeutic tool. One could touch the threads of women’s dreams, or with a female element. (Interview by Urszula Leiss, MA). Here I would also like to refer to dream experiments and recent work on, for example, the use of advertisements in dreams, and work on dream control. In the next part, I want to focus on the visual arts. I have already planned a conversation with Marta Kudelska M.A, curator, and an art critic, with a strong interest in issues related primarily to the relations of contemporary art with the Romantic tradition (interest of artists in magic, horror, and esoteric threads), strategies and practices of art curators, young art, but also reflection on art institutions, hauntology and memory. I plan to explore Polish artists who are strong using dreams and dream-like scenes in their art. I also have an interview with a dr. Alicja Myśliwiec, a spokesperson of the International Festival of Independent Cinema Mastercard Off Camera. We will talk about the themes of dreams in Polish movies across the years, and the significance of dreams for Polish people in general. The interviews will be concluded with people from diverse backgrounds who are using dreams and other shamanic techniques in their everyday life. They might not be shamans, or “whispering women” by trade, but they are using the same instruments, so some might call them just that. I hope this will be an interesting chapter, that will give us an overview onto the modern people from Poland, who are still practicing their ancestors’ ways, with full respect and honour.

This research will heavily feed into the artistic part of my practice, and the understanding of the legacy. I hope that in some way the work undertaken will have a didactic element to it that will allow people from other cultures to understand Poles better. Or it will make them smile or feel dreamy from time to time. The artworks that will be created because of the research will be in the form of digital images, traditional etchings, and short artistic films. All exploring various aspects of dreams. I plan to end the project with an immersive exhibition / event that will take the viewer into the world of Polish dreams, dreams, shamanic, conscious, as well as visions. I am also researching a way of combining films and art into an online/virtual exhibition that can be experienced in a nonlinear way. I have seen this technology used in modern streaming platforms before, where the viewer can directly decide where they want to go next. It is an interesting concept of implementing a gaming element to art that was never intended to be game-like. Is it worth doing it in a random way where every time you decide to visit you are going to experience it from a different starting point?

If the YouTube video doesn’t show up here please refresh the page- there is a glitch that sometimes doesn’t load up the video links.